Ancestry DNA recently released new ethnicity estimates based on a more than 5 times increase in reference samples, redefinition of several reference populations and a restructured algorithm for comparing individual samples with reference samples. Below are screenshots of the new estimates for myself (LLL) and my two sisters (MLH and LKA).

Significant in the changes from earlier estimates are the absence of Scandinavia, Southern Europe, East Europe, Iberian Peninsula and Europe Jewish; and the concentration of the estimates in the British Isles and Northwest Europe. The current estimates are much closer to the expected ethnicities of primarily German on our paternal side and primarily English and some Irish and Scottish on our maternal side.

The three siblings ethnicity estimates are compared in the following table:

These estimates are remarkably similar, considering the overlap in the geographical areas of the reference populations and the variation in the amounts of DNA inherited by each sibling from their grandparents and earlier generations. For example, MLH appears to have inherited less DNA from the paternal line (primarily German) than did LLL and LKA.

Why “Migration from Europe to Oklahoma”? 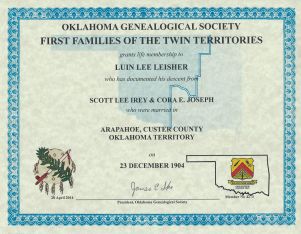 Oklahoma is my birthplace; my parents were both born in Oklahoma Territory, before Oklahoma became a state. My paternal grandfather, Henry Leisher, homesteaded a farm in northeastern Blaine County, in 1892. Frances Leisher (born Miller) and the children moved from Kansas to Oklahoma between 1892 and 1895. The family is documented in the 1900 federal population schedule, Cimarron Township, Blaine County, Oklahoma Territory. My paternal grandparents, Scott Lee Irey and Cora Emeline Joseph, were married 23 December 1904 in Arapahoe, Custer County, Oklahoma Territory. All four grandparents died in Oklahoma and are buried there: the Leisher grandparents in Roselawn Cemetery, Okeene, Oklahoma; the Irey grandparents in Waukomis Cemetery, Waukomis, Oklahoma.

Immigration of my maternal lines occurred much earlier; most lines appear in the United States prior to 1800, with birth locations believed to be England, Scotland or Ireland.

My ethnicity estimate from the recently-updated Ancestry DNA algorithm is:

Discover your personal and family heritage

Genealogy, the law and so much more

Finding ancestors and keeping them close to the heart

Stay focused and happy while exploring your roots

Adding DNA to the Genealogist's Toolbox

Discovering Your Ancestors - One Gene at a Time