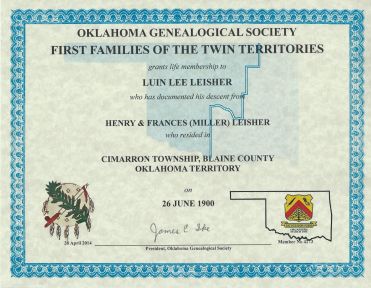 Oklahoma is my birthplace; my parents were both born in Oklahoma Territory, before Oklahoma became a state. My paternal grandfather, Henry Leisher, homesteaded a farm in northeastern Blaine County, in 1892. Frances Leisher (born Miller) and the children moved from Kansas to Oklahoma between 1892 and 1895. The family is documented in the 1900 federal population schedule, Cimarron Township, Blaine County, Oklahoma Territory. My paternal grandparents, Scott Lee Irey and Cora Emeline Joseph, were married 23 December 1904 in Arapahoe, Custer County, Oklahoma Territory. All four grandparents died in Oklahoma and are buried there: the Leisher grandparents in Roselawn Cemetery, Okeene, Oklahoma; the Irey grandparents in Waukomis Cemetery, Waukomis, Oklahoma.

Immigration of my maternal lines occurred much earlier; most lines appear in the United States prior to 1800, with birth locations believed to be England, Scotland or Ireland.

My ethnicity estimate (July 2020) from the  Ancestry DNA algorithm is:

Discover your personal and family heritage

Finding ancestors and keeping them close to the heart

Stay focused and happy while exploring your roots

Adding DNA to the Genealogist's Toolbox

Discovering Your Ancestors - One Gene at a Time